Welcome to Yarntown, a Zeldalike tribute to Bloodborne. Explore the streets of a cursed, gothic town, hunting beasts and uncovering twisted bosses.

Created by Max Mraz in the Solarus engine. Playable on Mac and Linux via the Solarus launcher, linked below.

I'm not selling this game, since it's a fan game! But I am selling/giving away some of the graphics I made for this game, right over here!

It should work fine with a gamepad/controller, but pause might be right bumper because of weird default mapping. Or it might not be! It seems like some controllers will work, and some won't. I haven't had any issues with the cheap USB controller I have.

Windows:
Unpack/extract/decompress either the 32 or 64 bit version, then click yarntown.exe to run the game.

Mac / Linux:
Download the Solarus launcher from https://www.solarus-games.org/en/solarus/download, then use it to open the data.solarus file.

Just a heads up: This game won't download or install.

cute but why can't we claim this besides download?

I'm sorry, I don't know what you're asking.

Hi! Lovely game, but would it be possible to implement some simple audio UI to lower the SFX of the wood breaking? It's quite loud compared to the rest of the game's audio. Otherwise I'm enjoying this 10x more than the original Bloodborne. :D

I don't currently have plans to add more features unless I start reworking this into a different game- this whole thing was just month-long project so it's got some rough edges. Of course, the box breaking sound being WAY too loud is pretty authentic to From Software's games lol

Hi, I want to translate your game into Turkish, I tried to do it, but the "Turkish" language does not appear in the game.

Hi! If you copy the form of the other languages (in terms of files/folders), you'll also need to add Turkish as a language in the project_db.dat. That can be done manually, or through the solarus editor, right clicking the folder and choosing "add as language".

I think that once it's added as a language resource, it should automatically show up as selectable. But I'm not 100% sure if the font can handle all characters.

thanks for your help i finished the translation here is the link of the files:

Cool - just because it's a bit sketchy to download a link from a stranger on the internet, could you open a pull request in the code repository? That's just a safer and more normal way to collaborate on code:
https://gitlab.com/maxmraz/yarntown
If you even just wanted to open a request with the language folder, I can make sure it's all connected and works, then do a new build at some point.

I've seen Iron Pineapple playing this game and it looks pretty cool but the control scheme really turns me off.

Wish you could change them to work better with mouse and keyboard or give a way (if that's not already an option) to map the controls how we want.

Thanks - I don't plan on working on Yarntown until I decide to make it a bigger, fuller game. But until that happens, you can edit the save file to re-bind the keyboard keys.
%HOME%/AppData/Roaming/Yarntown/Yarntown/save1.dat

Thanks for the reply and for your time to answer my question.

a question, this is the only yharnam zone or all the bloodborne game? and it is only yharnam, in the future you plained expand the game?

Hello Max, I'm Bruno Carvalho, I've tried to connect with you via twitter but was unable to DM you. Do you believe you could follow me so we can exchange a few words? I work for QUByte, a Brazilian Indie Developer.

Hi Bruno!- I got your message, sorry to not respond, but I'm not looking for help with porting at this moment, and get a lot of these kind of messages 😅

Thanks for reaching out!

Hi Max. Sure, I totally understand :) Thank you very much for taking the time to reply and keep making these amazing games :)

Downloaded the game but it looks all distorted and is hard to see.

Hi! I think this can happen if your machine doesn't support hardware accelerated graphics, or Open GL

It's a Accer Nitro 5 gaming laptop.

I'm not familiar with those or what they support : /
You might have better luck if you download the Solarus launcher to launch the game, and play with the settings in there.

I love this. It was both fun but still had a nice challenge but I do think that the bosses where a bit easy. MAKE MORE!

Thanks! I have a couple other games out (Ocean's Heart on Steam and Hallow's Eve here) which have more to explore!  : )

NICE! I'll have to check them out.

While I'd like to enjoy this, I'm having a very hard time getting past the controls. Any chance for rebindablility, or are things rebindable and I'm just stupid and missing the option?

I don't plan on going back into this to add that feature. You could edit the save file to rebind them though. I think the save is at {user}/.Solarus/yarntown_saves I think?

My other itch game, Hallow's Eve, has rebindable controls, but it's a lot of work to port that system into Yarntown for an old free side project : /

Hey i played your game and i love your concept of it being a Zeldalike tribute for Blodborne. I was wondering if you are actually going to make this into a full game in the near future including all of the areas and dlcs.

Thanks, I'm glad you enjoyed it!

To answer your question, for one thing, I can guarantee it wouldn't be the near future, because recreating an entire AAA game, even at a smaller scale, is still a massive amount of work that would take years. Secondly though, I don't personally see the point of just recreating an entire game- the fun part is translating it into a new format. The whole game is just too much, and the magic wears off. And also- Fromsoft made this game, it's one thing to do a small tribute, but I don't want to make a giant thing as a fan game. That's like years of working most weekends and evenings, for a free fangame.

I might make Yarntown into a full game as its own IP though, taking the core things that I think are important to Bloodborne, and bringing in some new ideas, and exploring a new world : )

I want to try the game out using controller. Do you know anyway I can remap the controls to whatever I want?

Just downloaded the game and can't wait to start playing. Does the game have a mute button or settings because I can't seem to find it?

Yarntown was a small side project I did in like a month, so it doesn't have settings, options, or controller remapping. I'd put that in if I made Yarntown its own IP as a full game.

This game is great! But I've encountered a bug where all lights started flickering. I suppose that should only be in the house but it gets annoying so you have to quit and restart. Other than that it's a tad easy. I beat both bosses first try. Gascoigne even without any upgrades. I know you won't continue work on this game but this is a nice proof of concept.

I got that bug once or twice too, but never figured out what caused it. Basically, the lighting system tries to shift from one color of light to another, but can never land on the new color, cycling through a bunch of RGB values to try and hit it.

Next game / if Yarntown becomes its own IP, will have a different lighting system, that one hogged too much CPU anyway

Hi I love the aesthetic of the Yarntown. I have tried to upload this onto my Raspberry Pi 4 with Retro Pie. It did not decompress correctly. Is there something I'm missing to get this to work on the Pi?

this game was very fun. i've never played bloodborne, so there's probably more to this game that i could have appreciated. but im told it's a rather faithful recreation of bloodborne's beginning, so kudos. it also introduced me to solarus,  big ups!

Dude, this game is amazing.
Please, make the rest of the original game.

fascinating game! wouldn't have found it without this guy:

Very nice work on this! I've only been playing for a little while but I love it so far!

Please have an android port!

I love when people make "demastered" versions of games. Looks like you've done a fantastic job, keep up the good work! 👍

Will you continue to develop this game? Really looking foward! Wonderful job making this game!!!

Thanks! And no, I'm not planning on going any further with this as a fangame.

You REALLY should! It is a great simple version of the game. A demo just isn't enough. This is good!

It's really fun!! I'm planning on uploading my full playthrough in a few days but for now I have put together a short video! Great job!!

Is this game complete? Or is a demo?

It's as complete as I'm planning to make it.

i have never played bloodborne but could you please add a feature like dark souls' fog doors so players know when they are going to fight a boss. Other than that your game seems really good so far

That's actually a difference between Bloodborne and Dark Souls, BB doesn't have fog doors going in, so you can be surprised when coming up against a boss. Other than the fact the level design is so excellent that you can usually tell based on pacing and visual hierarchy that you're headed into a boss area, hahaha

This game is phenomenal, you got all the tiny details right, I navigated from my mental map of Bloodborne just fine, the combat was pretty satisfying (including that good good regain mechanic), and leveling had the same boost to things that Bloodborne has. It felt really polished, and I was sad when I hit the end. I'd seriously pay good money for a full game like this, or at least more of it!

Hi guy; you can "buy" the tile pack for give money to the creator. You can pay whatever you want:

Dude this game is so sick I can't even explain it!! Here's a video of me playing it if you wanna check it out. Words cannot explain how sick Yarntown is!

I've never played Bloodborne before, but this game is pretty fun! I'll probably write a full review when I've played it more and also when it's not almost 2 AM in my time zone, but for now, just know I'm liking it.

ok... i am a bloodborne addict who also loves pixel horror. so this game brings a tear to my eye lol truly this is amazing!

interested in someone to help with the portuguese translation?
if so, feel free to ask

This is fucking dope! It's an awesome combination of two of my favorite games, and done very well! Only suggestion I have is maybe have different control options for PC user to switch to? Such as WASD and Left Click and Right Click attacks, other than that I loved it! 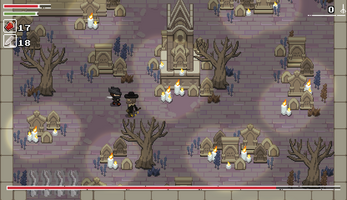 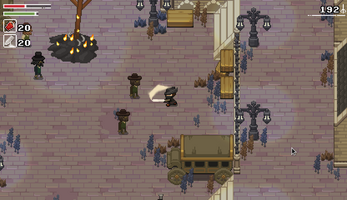 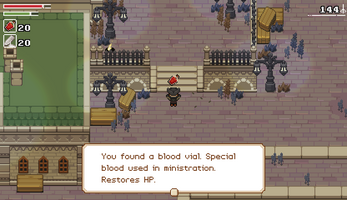 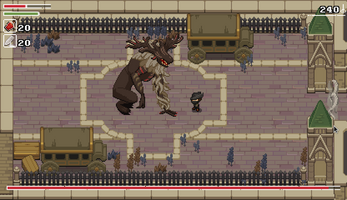 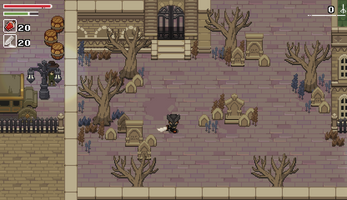